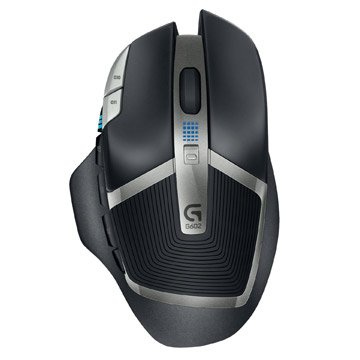 The Logitech G602 is one of the most popular wireless gaming mice ever created!

One of the biggest complaints with wireless gaming mice is that the battery constantly dies while you’re in the middle of the game. The great thing about the Logitech G602 is that the battery has a 250 our life, that means you can play nonstop for up to 250 hours and not have to worry about changing your battery. This is up to 8 times more battery-powered than many other wireless mice.

This gaming mouse also uses the Delta Zero sensor technology, which simply means that it uses a power saving feature for when your mouse is not in use. With this gaming mouse you get a 2.4 GHz connection that will help give you a great response time and not have to worry about chords anymore that will get in your way.

One of the biggest problems in the past with wireless mice that were used for gaming was that you get a slow response time and you get disadvantage in the game. With this gaming mouse created by Logitech you really don’t have to worry about this because it was created in a way that would make that disadvantage so small, that having a wire on your mouse is probably more of a disadvantage than your slightly lower response time.

There are also performance and endurance switches on the mouse that will allow you to easily switch between the 2 different modes to be able to save power. This mouse should work with almost any platform including Windows 8, 7, Vista and even the Mac.

How much does the Logitech G602 cost?

The mouse is currently priced around $54. That is at a 30% discount from around $80 for the list price. You get a great mouse that delivers you the latest features and technology for a very low price and you can even get free one-day shipping with Amazon prime online.

This gaming mouse features 11 customizable controls that you can use to easily assign to be able to give you an advantage in games where you wouldn’t have access to these types of quick buttons on most other mice. You can control your mouse is performance as soon as you plug it in using the preconfigured settings without any software that is required.

Another great feature of the G602 is that you can change your DPI in the middle of the game by simply pressing a button. There are over 5 different DPI settings for each profile that you would like to set and you can adjust them from the lowest DPI setting of 250 all the way up to 2500.

What DPI is best?

I personally use the lowest setting on my mouse which is 400 DPI and I enjoy the accuracy and precision that I can get with a low mouse sensitivity, however you’re going to have to adjust your DPI to whatever feels best in your gameplay, don’t simply assume that a higher DPI is better, because I am a top frag player in most FPS games and I use the lowest sensitivity in game usually and the lowest DPI on my mouse settings.

What do I get inside the box?

If you decide to purchase this mouse from Amazon you get a box that comes with your mouse as well is a wireless receiver. On top of these things you get a receiver extender cable and 2 AA batteries that are already installed in your mouse. You also get the typical user documentation that will give you some details about your mouse. This mouse is one of the most popular wireless mice and overall gaming mice on the Amazon marketplace and it has a 4.4 out of 5 star rating from over 1000 people all around the world who have been using it.

One of the highest rated reviews for this mouse is a user who said that it is a good all around mouse that has about 1 1/2 months of battery life. He said that he loves using it and he switched from a wired it G500 mouse and was worried about the way as well is the responsiveness and having to charge the battery often. However after purchasing the mouse he said that he now doesn’t have to worry about any of those things because Logitech took care of all of them and you now have the perfect wireless gaming mouse.

He also said that it has a good build quality and you get textured grapes on both sides of the mouse. Another thing is that if you only run one of the batteries the weight of the mouse is very low and comparable to some other popular gaming mice. Another great thing that you may want to know is that he wrote in and said that there also weren’t any accidental thumb button presses, which simply means that you aren’t accidentally going to be pressing the customizable buttons that are on the mouse and opening random programs or doing moves in games that you didn’t really want to do.

What problems that people experience with this gaming mouse?

Not everyone who purchase this mouse was satisfied with it. One user said that the metal mouse click button seems to go out after only using it for a couple of weeks. He said that after he received a replacement the same thing had happened again, where the middle button works for some time and then stops working suddenly. Other than that he said that the mouse is a very good size and fills up his palm very well and that the battery life is great and you don’t have to worry about switching batteries in the middle of important games.

Another user said that he was experiencing lockups in the middle of games. He said that whenever he 1st bought the mouse he really enjoyed using it and that it fit his hand very well and felt very durable and high quality. However after using the mouse in the past month he noticed that he would experience some bad stuttering in the middle of games and that sometimes it would even stop working for a few seconds at a time. He said that overall he is disappointed and that he is going to be looking for another mouse.

Should you buy this gaming mouse?

It is really up to you if you should buy this gaming mouse or not. If you are really set on buying a wireless mouse and you really want to use it for gaming, then this is probably a good mouse to buy. Most people who bought it were very satisfied and enjoyed using it, however there were few who experience some issues. Overall we think that you are going to be satisfied with your product and you won’t experience many of the issues that a few occasional users were having.