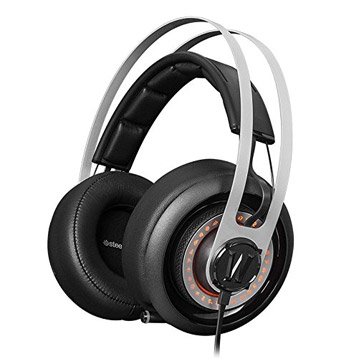 You’re looking at the SteelSeries Siberia Elite gaming headset that was created specifically for World of Warcraft (WoW) fans around the world.

Some of the features of the SteelSeries Siberia Elite headset include the ability to customize all of the illuminated icons on the ear cups that you should be able to see in the pictures, and you can choose any color that you would like to further customize them with.

The Siberia Elite also uses the latest next-generation SteelSeries technology in the form of their 50 mm speaker drivers, that create a rich sound using a low frequency power.

You can also count on the Dolby Headphone and Dolby Pro Logic IIx technologies to create a beautiful 7.1 virtual surround sound and give you a unique and immersive audio experience with your PC.

A lot of people who bought this headset left a five star rating; in fact there were no ratings other than five-star ratings for this headset. People who left a review about this headset were saying that the headphones are a great product and that they are comfortable to wear and they sound great, and they even look great. There is literally nothing more you could possibly want from a gaming headset, except a lower price.

Another user said that there is absolutely nothing negative that they could say about this headset because they are very comfortable and sound great, and they are also WoW related, which is a huge bonus for him. He said that he sometimes would go anywhere from 8 to 10 hours of playing without taking any long breaks, and his ears would never ache with the headset on and it would never give him a headache afterwards.

Another user commented that whenever he is playing CS:GO or other first-person shooter games, he is able to hear footsteps from all the way across his screen on the other side of buildings in the game. He also said that the headpiece fits his head perfectly and that the cushions make it comfortable to wear for long periods of time. He said he also really likes the design of the headset overall.

This gaming headset has lots of great features that might justify the high price tag for you. Keep in mind that this headset is currently for sale at a 20% discount from its list price of $219.99. You can currently purchase it for around $175 with free shipping.